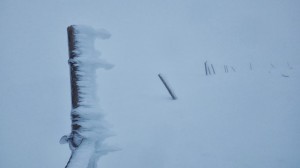 It was another very white day on Aonach Mor. The weather station is currently not reporting due to lightning damage. The temperature was around -2 degrees Celsius at 1200 metres. Heavy showers were putting down more snow, and I could see an increase from yesterday. I think I saw some evidence of recent avalanches on Easterly aspects, but in the poor visibility it was hard to tell.  They were both in locations that I did not want to get to close to. Hopefully we will be able to see a bit more tomorrow.