A lot fresh snow, not a lot of visibility

It was a wild day on the hill, with plenty of fresh snow and not very much visibility. 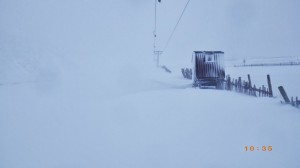 The goose tow track was filling in quite nicely. Often observing the quantity and the feel of the snow behind snow fences such as here, can give an idea of what the snow will be in much more hazardous locations, such as the the gullies in Coire an Lochan. 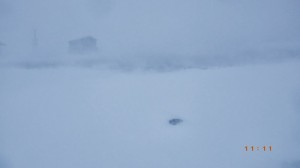 Pretty wild up on the top. That is the summit ski patrol hut in the background. 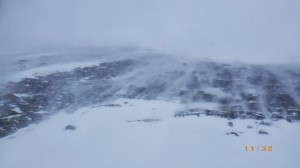 Lots of spindrift blowing along the ground near the top of Coire an Lochan.  A lot of this would be deposited in the coire, and particularly at the tops of the gullies. You can imagine with this going on hour after hour through most of the day that a lot fresh and not very stable windslab will have built up. Probably best avoid these types on locations until it all consolidates a bit.