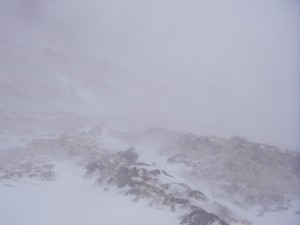 It was a wild day on the hill today, by far the wildest day I have had this season. According to the staff at Nevis Range a gust of 111mph was recorded on the one of the Gondola Towers at about 600 metres. The Aonach Mor summit station was recording gusts of up to 90mph, but the wind was from the South East, and the weather station is slightly sheltered from South Easterlies.

There was lots of snow blowing around, I am not sure how much of it was blowing down from higher up the hill, and how much was falling out on the sky. The picture shows my snowpit site just below 600 metres. After being flattened by the wind numerous times I decided that I had seen enough and  that the risk of being blown over into rock was getting too great.