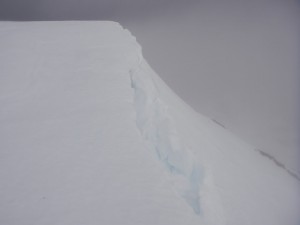 Remaining cornices are slumping and prone to collapse in the mild conditions. 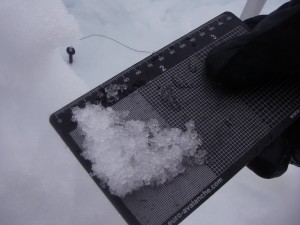 Wet grains. The snowpack is now almost completely made up of wet grains. Some layers harder and more frozen, while some are softer and wetter, but all are some form of wet grains. Although the appearance of the hill is being significantly affected by the mild temperatures, on high East aspects there is still quite a depth. In the background of the photo the end of the probe can be seen. This probe is 3m long, and even from the bottom of the snow pit, which was just over a metre deep, it did not touch the ground, implying a snow depth of greater than 4m. This is the case on a lot of high Easterly aspects.