Avalanche on the Ben. 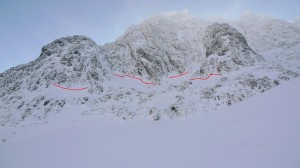 Today we were up on Ben Nevis for a wee look about. In general there is lots of snow, and winter climbing conditions are looking good, and there were very few people about.
There has been a large avalanche from below the Orion face. The crown wall ran all the way from below the first platform of North East Buttress to below Observatory Ridge. In the photo I have marked the most obvious bit of the crown wall in red. The height of this crown wall was quite variable, and in some sections it was quite shallow and hard to pick out. However, other sections were quite obvious and could be seen as far away the the Dam. We estimated at one section the crown wall was about 2 metres high.
All in all quite a substantial avalanche, and the largest I have seen from that bowl below the Orion face. It probably occurred some time on Tuesday when there was a lot of snow, and the freezing level briefly rose to about 1000m.