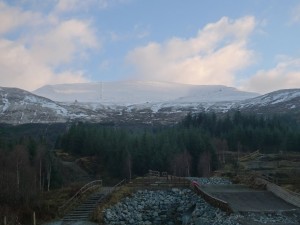 It was a weekend of low visibility on the tops, so no nice photo’s I am afraid. It did clear up today after I had got down from the hill, so here is one of Aonach Mor taken this afternoon. Snow cover is generally pretty good at higher levels, with the ski touring being good if the visibility would clear up. There is also some good climbing on Ben Nevis. With a thaw, followed by a freeze and hopefully some more snow forecast for later in the week, hopefully conditions will improve.