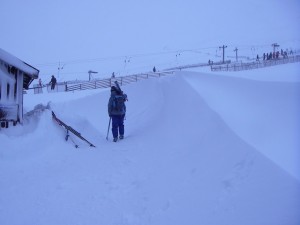 It just does not seem to stop snowing in the the Lochaber hills. Southerly winds have been moving the snow about. For example the drift to the right of the skier in the top picture was not there yesterday, and as it has snowed quite alot it the few hours since I took the picture is probabley even bigger now. 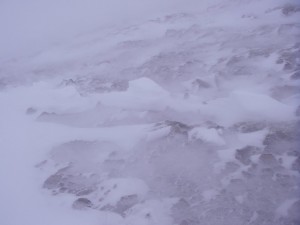 The other picture shows some raised foot prints. These were formed by someone walking through soft snow (probabley yesterday). The wind has then increased, and eroded the surrounding soft snow to leave the hardened footprints standing proud. In many locations the eroded snow will end up being redeposited onto steep slopes, where it will show poor stability.

Although I could not see much higher up the hill, it is a safe bet to say that there to loads of unstable snow in many of the gullies at the moment, and that a few avalanches will have occured today. So just be careful if you are going out and about in the hills for the next few days.
Blair