The last two days have seen a nice flux in temperatures, firming up the snow and encouraging ice formation. There was a period of avalanche activity during the mild wet conditions experienced on Sunday. Yesterday we were on Ben Nevis. The photo shows Blair investigating the extensive debris beneath No. 5 Gully. Debirs was also observed beneath No. 2 Gully and in Coire an Lochain of Aonach Mor . 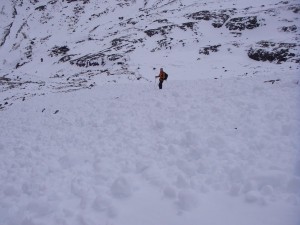 The other photo shows conditions this morning on Aonach Mor, with a team traversing the snow slope beneath the crags. Avalanche debris from Sunday can be seen in the background. Not as much snow fell overnight and through Tuesday as was expected. However, small drifts of fresh snow show poor bonding to the underlying neve with pressure from boots and skis making the new layer crack and slide in places. 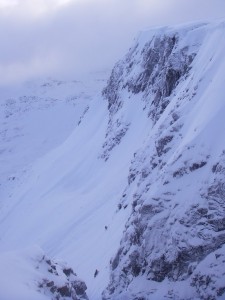