The cold and generally settled conditions have continued in Lochaber. Normally snowpack stability will improve during settled periods. However, due to the consistant low temperatures of late, a strong temperature gradient has developed within the snowpack. This has caused a process called faceting to occur within certain layers. This process is due to vapour transfer within the snowpack and causes the crystals to become angular in shape, and have a sugary consistancy. These layers are very weak, and in many locations are covered by a layer of windslab. 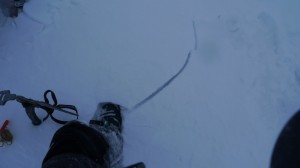 In the picture a crack shoots out from my feet (a sign of poor stability) on an easy angled slope at the top of the West Face of Aonach Mor. Very weakly bonded areas of windslab were also observed on the East Face. Although no spontaneous avalanches are happening at the moment, there is potential to trigger avalanches on slopes of almost any aspect.

Have a good new year and be careful folks.
Blair