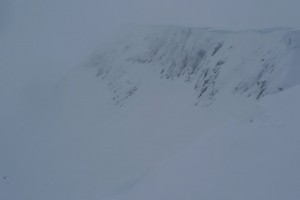 The original plan today had been to head over to the col between Aonach Mor and Aonach Beag to see if there had been any avalanches on the latters North side. However, the visibility was poor and a did not think I would see anything from the col, so I decided to stop near the actual summit of Aonach Mor and investigate the snow in one of the Gullies at the top of the West face.

On the way back it did clear slightly, which allowed me to take this shot of the South Side of Coire an Lochan. Although it is hard to make out there is a crown wall running diagonally up from lowest rocks to the the base of the route Stirling Bridge (the steepest buttress in the picture). This avalanche probabley released sometime yesterday (Sunday).